Cross Peak is a short little hike in west Reno that you can do in an hour or so. The peak itself overlooks Caughlin Ranch and has a bit of a steep final section, but not too much for someone who gets out on a trail every now and then. The peak itself isn't named on any maps that I could find, but gets its name from the iron memorial at the top that forms a cross and some other artwork. I had heard from people that they could do it in the morning before work and in the past few months I've made it my go-to for a quick afternoon workout with my dog.

The simplest path is to get to Caughlin Parkway from whichever direction you're coming and stop where Alum Creek crosses underneath at the top end. It crosses below the Caughlin Club as well, but that's the really long way, which is fine if you have the time. Parking right at the bridge is perfect, as there is a path leading down to the main path that runs the length of Caughlin Ranch along the creek. 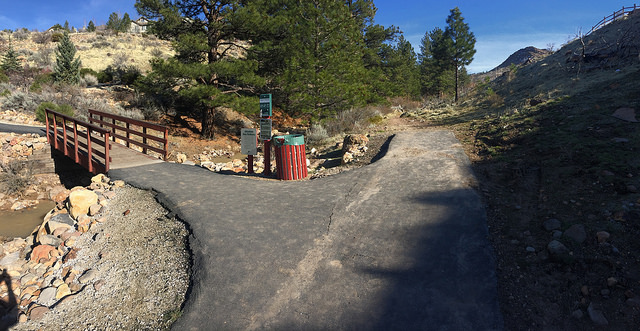 Drop down onto the paved pathway and follow that until it crosses the creek at a bridge that turns to the east. At that point, you'll see a dirt path continue straight along the creek. That's where you want to go. Don't cross the bridge, or you've gone the wrong way. You'll follow that dirt path for another half mile. There are several points where it looks like the path crosses the creek. It's fine to do that, as long as crossing isn't dangerous. The creek is running high right now, and my dog was up to her chest in the water this time, but I realized on the way back that the path stays on the west side of the creek all the way if you follow it that direction, so there's no need to cross if you don't want to do that. 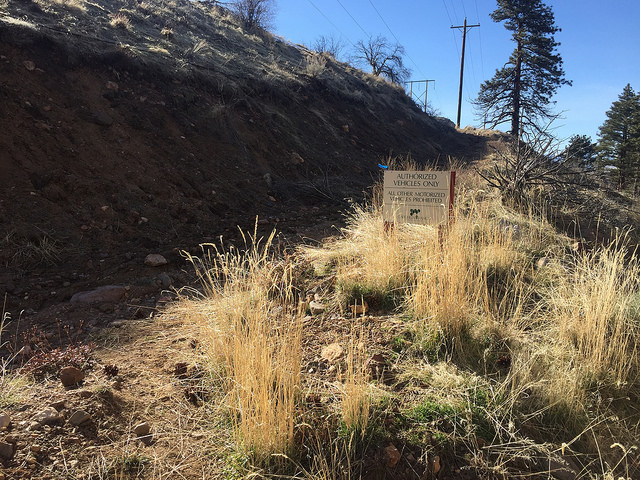 After a half mile on the dirt path, you'll deviate from the creek to the west (right) and up a utility road that's marked by an Authorized Vehicles Only sign. The road heads uphill a bit and is probably the part of the hike most prone to being muddy. You'll only be on that road for about a tenth of a mile before you crest a minor ridge. At that point, the road continues on and a path veers to the left. That path heads directly up the north side of Cross Peak. 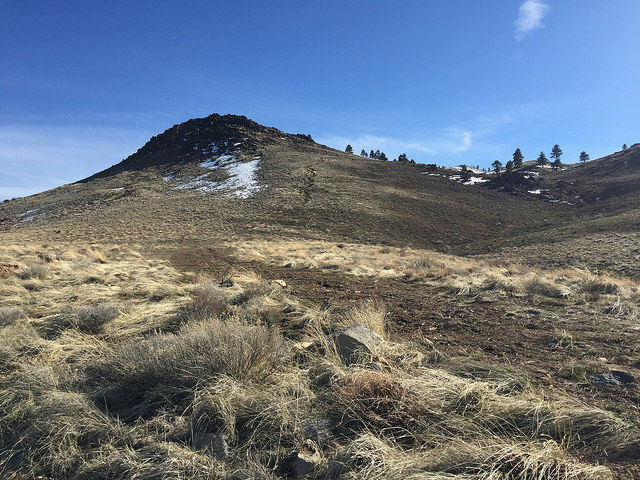 Follow the path straight up to the top of the hill. It's about a quarter mile more to the top and the slope hits about 25 degrees at one point, but that's honestly harder to navigate on the downhill trip than it is the uphill. Take a few breathers and enjoy the view as Caughlin Ranch reveals itself below and you get a nice look across the valley at Peavine Mountain. The total elevation gain on this route is just over 500 feet, which is a pretty good mile. Most of that comes in the last quarter, as the angle increases dramatically.

As you reach the top, it gets rocky. A couple of scramble holds will get you to the cross and the log book, which is stored in an iron compartment at the top. Each time I've been there the wind has been more pronounced than at any other point of the hike, so it might be helpful to carry a little something to keep from getting too cold at the top.

The way down is slightly different. You'll see a path heading west. Follow that and immediately wrap around back to the north and pick up the path you followed on the way up. If you keep heading west, it might be a bit less steep, but it'll be longer. It's also a bit slippery right at the beginning, but when I have wrapped to the north, I could mitigate that by keeping on the rocks. So, pay attention to your footing and make sure you've worn shoes that can handle some rocks. I have done it in my hiking boots, which are pretty lightweight, and my trail runners. Both were just fine with no problems.

Once you pick the path back up, the only issue you'll have is that it's steep. Like I said before, it's a tougher trail to navigate on the down slope than the up slope, but it's short. Follow the road back to the creek and cruise on out at downhill hiking speed.

You can do this hike from any point along the Caughlin Ranch walking path that follows Alum Creek. That path starts all the way at Walden's, which would add a couple of miles to the total. I have also picked up the path right at Plateau where the Steamboat Ditch crosses Caughlin Parkway, and I've jumped on the path off of Bitteroot Road below the Ditch Trail. That last one only added about a quarter mile to the total. It just depends on the time you have. The route from the tunnel took me a total of an hour last time with a few minutes hanging out at the top. 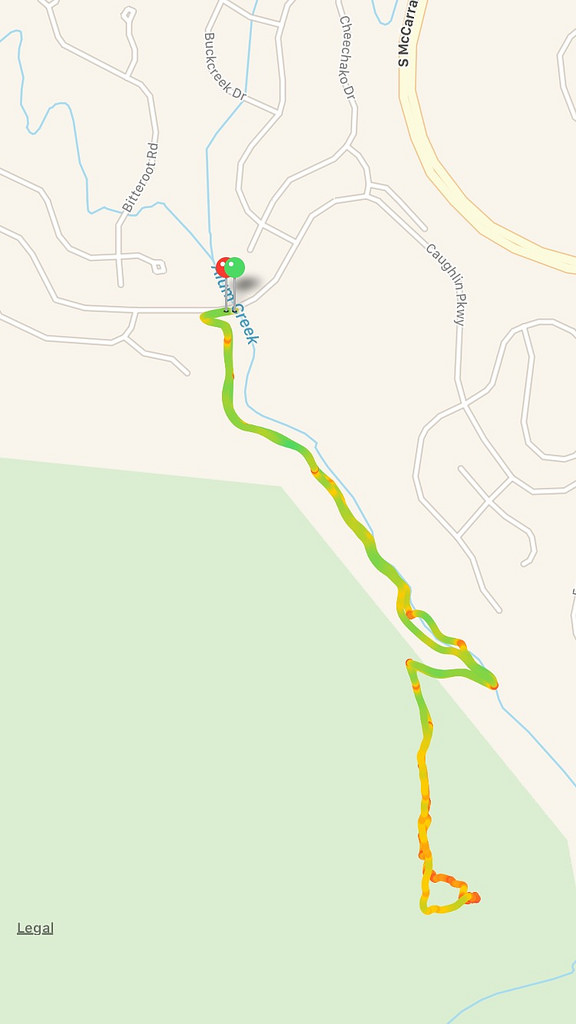