One quarter of a year. I am finishing up a span of thirteen weeks without having alcohol. I am not here to preach a booze-free lifestyle at all. I really don't know if I'll drink again (I probably will), but that's not the point. I wanted to see what improvements I could make while doing all of the hard things I do while also making sure to take slightly better care of myself in the process.

Ostensibly, this project began with the idea that I would be training for a multiday climb of Mount Shasta. I would be embarking on a twelve week program for training, and I thought it might be better to do this run without drinking at all. I would have support within the house, as Christy had also ceased drinking several weeks before I did and was reporting decent things back. So, I started it in earnest on February 14. I hadn't had anything since that past Friday (the 11th), but the program began that day, so that's what I'm counting. Here are a few things I have found.

Do you know me? Then you have probably heard me talk about my watch. I bought the Garmin Fenix 6 Pro Solar in October 2020. I had been an Apple Watch wearer prior and had no complaints. But with Covid doing its thing, I had been forced to train on my own after years of working with a coach and group that I love. I wanted something that could help guide me and offer me the tools to track everything I could about my body. So, I went with what I consider the gold standard of fitness watches. Now, this isn't a review of the watch, but I highly recommend it for anyone who 1) knows enough about what I am about to go over to properly use the watch, 2) can find it on sale (I did), and 3) cares even one half of what I do about the data produced during training.

When I made the decision to go alcohol-free, one of the main reasons was what I had seen several months earlier when I tested positive for Covid-19. I tested in late September and came out of quarantine on October 2. My watch, which had been to that point only used as a workout tracker and part-time coach, suddently thrust itself front and center in my day-to-day. A few of the features that I had found gimmicky and mostly not useful became really useful and things that (relatively speaking) could be important tools in how I treat myself. For instance, a feature called Body Battery was something I had used mostly just to make jokes. If mine got down to 20, say (think of the "battery" as a charge from 100% to zero, with a corresponding number), I would remark about how close to death I was or something to that effect. Not funny--just the kind of thing you say to a spouse. Well, during my Covid stint, my Body Battery was telling me that I was about as run down as was humanly possible, according to the watch. While a normal day might have me waking up with a number in the 90s, I was waking up with a number around 25. The degree to which this metric was corresponding to real life was undeniable. Even if the numbers were off in their precision, the relative closeness to what I was feeling seemed like something I should pay attention to.

In addition to Body Battery, my watch tracks sleep, resting heart rate, and stress as determined by the actions of your heart. Aside: the heart stuff is tougher to understand, but there are some real world things that happen to me that make me trust this as well. It took a few weeks, but holy crap did everything start to come into focus for me. Below is a graph showing my average stress level by week over the past year. Again, this is not self-reported, but a measurement of how my heart is acting throughout the day. This stress level also informs the Body Battery metric. 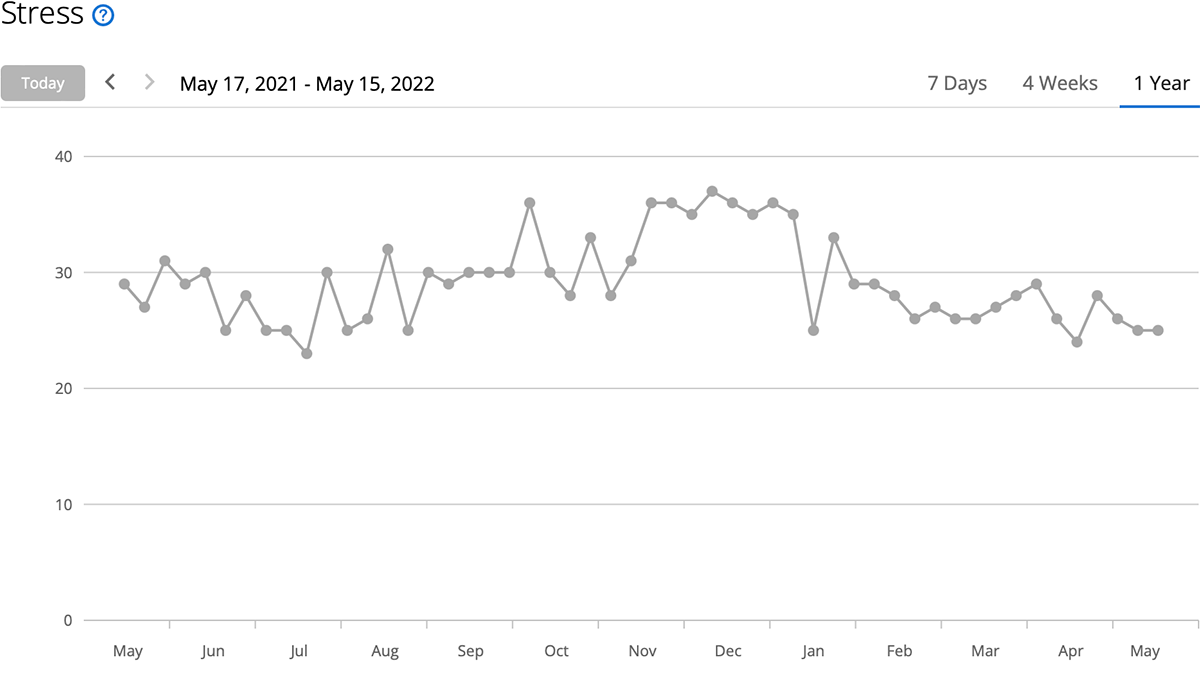 As you can see, stress was much higher in the months prior to Feb. 14. After Feb. 14, the averages stabilize much better at a relatively consistent level. Differences might mean a tougher workout week (periodization will do that) or a particularly busy week at work or something like that. What you don't see are the jumps and sustained higher levels. I believe those were due to drinking. You'll start to see a pattern emerge here. I would drink one week, then decide that had been a bit too much, so I would take a week off. It was pretty common for me to do that! So you see that in the jumping up and down late last year. You might also see sustained higher levels of stress. Those are the weeks I didn't take off.

In addition to stress, my watch tracks sleep. It tells you how much you got, the stages, etc. It also gives what it calls a Sleep Score. That score (again) is on a scale of 1-100. This one I have less data on. It was draining the battery on my watch a bit more than I liked, so I hadn't turned it on until I got Covid. So, the data begins there, but does contain several months of my drinking. 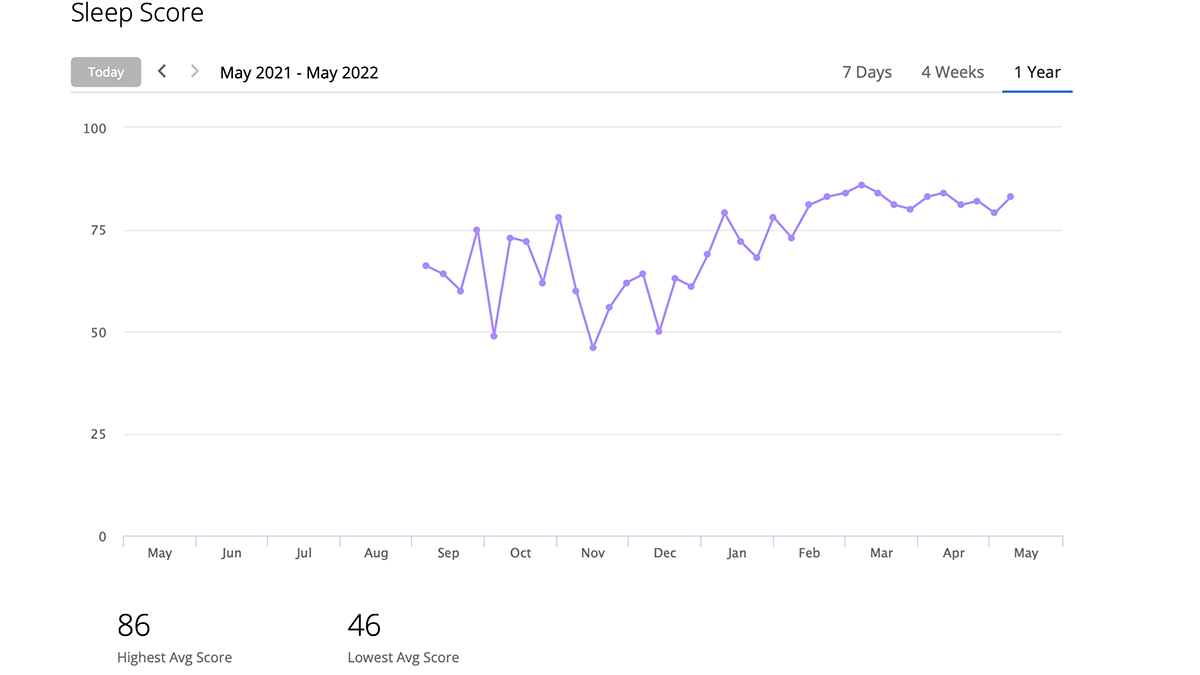 A pattern emerges again. You can see that my sleep was incinsistent from weeek to week. Drinking more in one week compared to the next, etc. The particular things I can tell you about sleep and alcohol are as follows: 1) deep sleep is scarce after having a couple of drinks, 2) stress levels are measurably higher after a couple of drinks and they contiunue longer into the night/early morning, 3) sleep scores are considerably lower when drinking. Those aren't necessarily reflected here because they are metrics that Garmin doesn't provide in nice screenshottable formats like these others.

And finally, we come to the part that matters most to me about all of this. It's the reason the two things above matter. That's how this affects my level of fitness. In addition to the weeks of no alcohol, I have also embarked on a regimented training program designed to elevate my fitness to being optimal for a climb like I am about to go on. One way I have always measured where I am fitness-wise is my resting heart rate. In addition to the stress induced nby drinking alcohol, or maybe as a result, your heart rate is elevated after a few drinks, and that can carry through the night while sleeping. A lower resting heart rate indicates both being fully at rest and a greater overall fitness level, especially when compared to one's self over time.

There are far fewer peaks and valleys with resting heart rate than with the other metrics, but the trend is unmistakable. Since mid-February, my resting heart rate has been on a downward trend, both because I am taking better care about what goes into my body, and I am training consistently and with intent. And here's the thing--I have been in good shape this whole time! My training, while not a specific and directed, has never stopped and I was consistently putting in 6-8 hours each week even during those higher average weeks. This difference is the booze. The correlation of all the things I have shown should make a pretty compelling case that drinking really screws with your body's overall health.